On the 12th and 13th of July I went to my first Edwardian themed event at Crich Tramway. I’ve been to the 1940s and 1950s events there several times now, each one providing great photographic opportunities. This event commemorated the suffragette’s struggle for the vote, the sinking of the Titanic and the lead into the First World War.

It almost goes without saying that I took the Mamiya C330F, but this time I also took a 1930s Kodak Box Brownie for a more ‘in period’ camera. I have used this only once before at the 2013 Haworth 1940s Event which provided some interesting results.

The outfits worn at this time often had very intricate lace work and strong patterns. This very ornate craftsmanship is difficult to capture, but naturally a quality medium format camera and lens extracted all of the detail to show these garments at their finest. 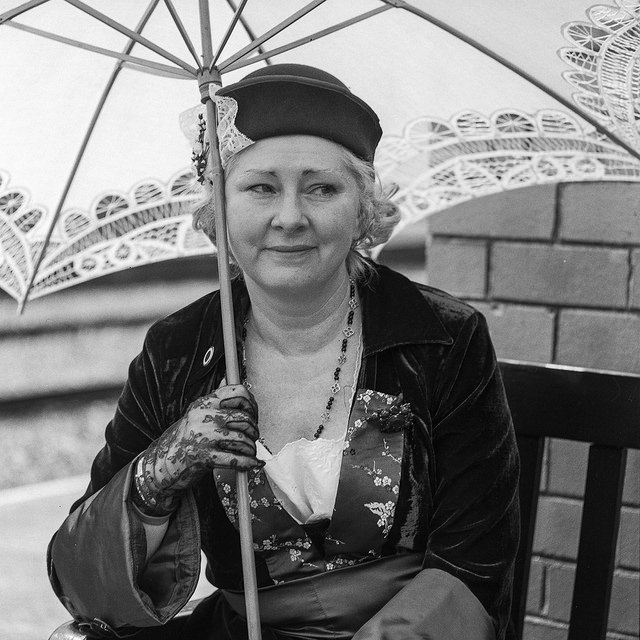 The bright sunshine meant that all of the parasols were up during the event on Saturday. The 80mm lens captured all the fine details in this lady’s gloves.

The lady here chose the ideal outfit for this era, if not for the high temperatures experienced on the Saturday! Luckily the parasol diffused what would have been very harsh sunlight, creating a much softer image lighting wise.

I have started taking more photographs of couples at these types of events, as they often show the high levels of commitment that people put into their admiration of the past. I met a delightful couple who’s outfits really stood out, and I simply had to photograph them together. 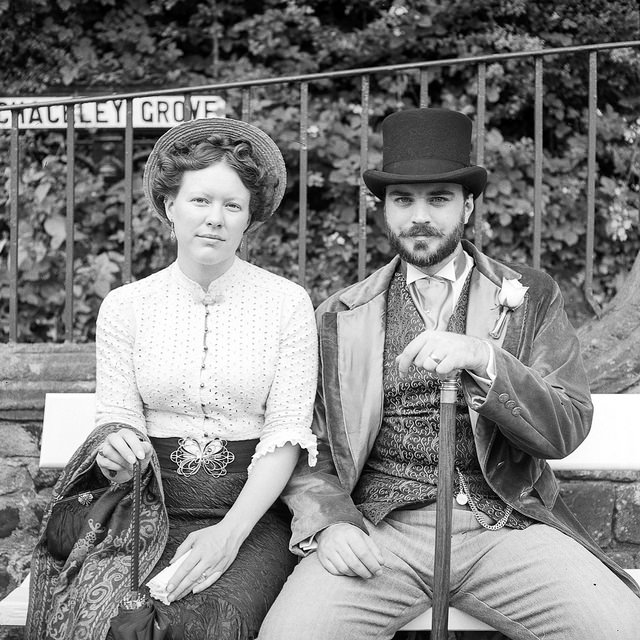 An Edwardian couple with great outfits at Crich. I liked the simple setting with the street name and bench in the background. The cane leads the eye right into the photograph, as does the Lady’s arm.

Tonally, this photograph has everything from the deep blacks of the top hat to the bright whites of the blouse, and everything in between. It often strikes me how much information is recorded in a film negative, as opposed to a digital file.

A soldier of the age

I’ve often photographed people dressed in World War 2 uniforms, but it is rare to find events where World War 1 re-enactors are present. This event however was attended by such people, and I took the opportunity to photograph several of them throughout the weekend. 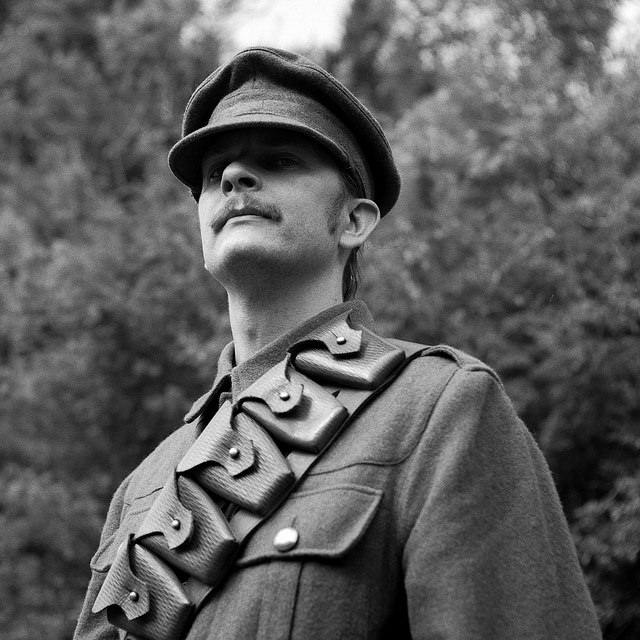 This photograph had a great feel to it, with the darkening of the eyes under the cap suggesting the horrors that would be seen by First World War soldiers fighting in the trenches.

I was really pleased with the feel of this photograph – to me it signified the ‘stiff upper lip’ of the British army in the First World War, who continued to fight despite the desperate conditions in the trenches.

A Lady of the age

The weekend featured performances by the Time Tarts Re-enactment group who performed suffragette demonstrations and talks throughout the weekend. I photographed one of the suffragettes holding a banner towards the end of the day. 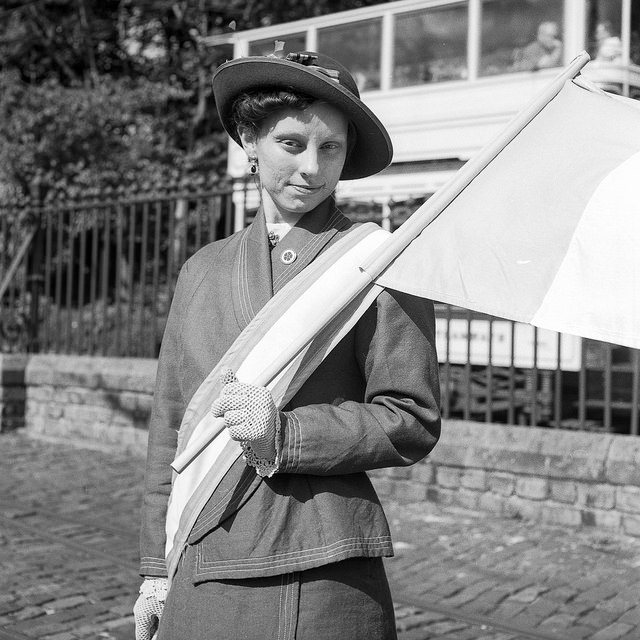 A suffragette holds a banner while a tram passes by in the background, creating an authentic feeling image for the time.

I love creating images that feel as though they bring back to life part of our collective past. Often, it is about what isn’t in the frame that makes the image work. With this photograph, I felt that the combination of period costume and appropriate background created exactly this.

Some surprising results from 1931

I don’t often use box cameras, mainly as the images can be very hit and miss. I have used an Ensign box camera in the past, which has a rather slow shutter, and often produced blurry images. I also have a 1930s Kodak Brownie No 2, which is in excellent condition. The shutter feels snappy and accurate, but the portrait viewing window is very hard to see out of, which is why I mainly used it in landscape orientation at this event. 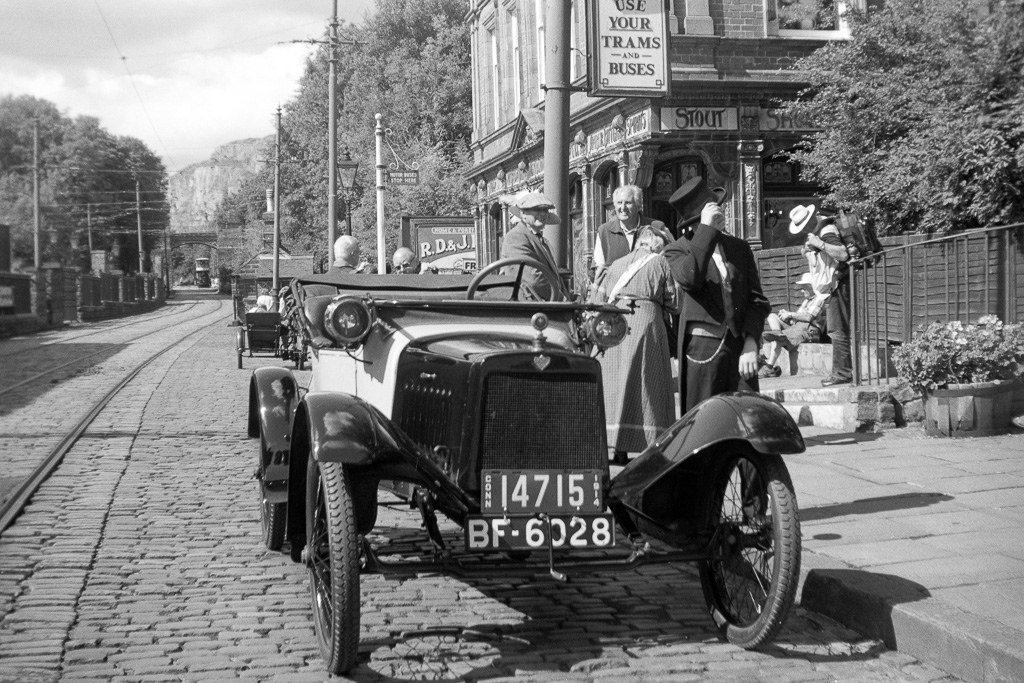 I was amazed with the quality of this image, which was on HP5 at f/16. The photograph was very sharp for a box camera, and this photograph looked as though it would have been taken a hundred years ago.

I was amazed with the quality of this image. I took in on HP5 plus, which is not usually the 400 ISO film of choice for me, as I often think Delta 400 is far superior tonally. After seeing this image however, I think it works really well with simpler box cameras for producing an authentic, lower contrast look.

Another great event at Crich Tramway

I really enjoyed the Crich Edwardian Weekend as it provided some new and interesting subjects to photograph. I want to go to other events of this type, as the costumes and variety of dress styles provide alternative and interesting subjects. I may also consider getting a folding Brownie camera, as this will provide a highly portable package with some additional focusing options over the Brownie.

You can see more photographs in the Crich Tramway Edwardian Event 2014 album on my Flickr page.