On a very wet Saturday the VSCC Shuttleworth & Nuffield Trophies races took part at Cadwell Park in Lincolnshire. I have not photographed many events in such wet conditions before, and this proved to be a challenging one due to the sheer volume of rain falling on the circuit during the morning.

With conditions being so wet, being able to change lenses was simply out of the question. I stuck to using the 70-200mm lens for the entire day, and only used the Mamiya C330F when the weather subsided in the afternoon. I put my rain cover over my 5D MkIII, and put on my over trousers and waterproof jack. This would be one wet day at the circuit!

Even more sideways action than usual

Due to many of the vintage cars having live rear axels, sideways moments around the Cadwell Park circuit are not uncommon – in the wet however, they were almost perpetual! Veteran Frazer Nash racer Charles Gillett found the conditions to his liking, skilfully sliding his ‘Nash through the mountain section. 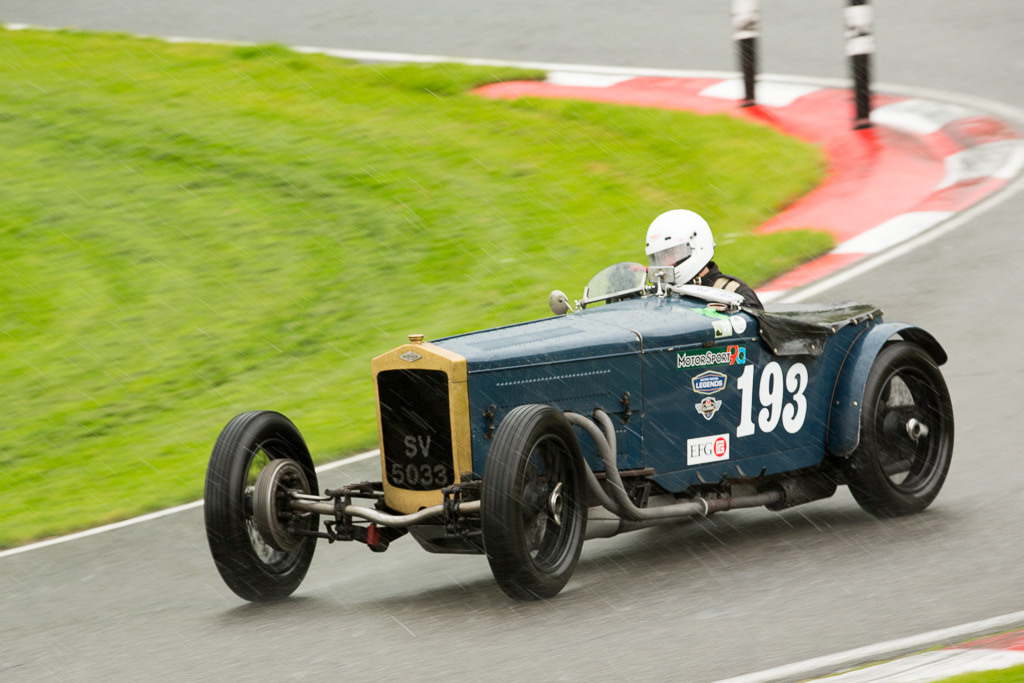 The Frazer Nash of Charles Gillett getting sideways through the mountain section. The rain can be seen pouring down as he fights the back of the car at Cadwell.

The Hall Bends: a truly great section of track

The Hall Bends at Cadwell have always created some great photo opportunities as cars swerve through the gentle, elevating corners before finishing the lap. They look even better when Chain Gang expert James Baxter races through the curves, as he did in the GN/AC Rabelro. 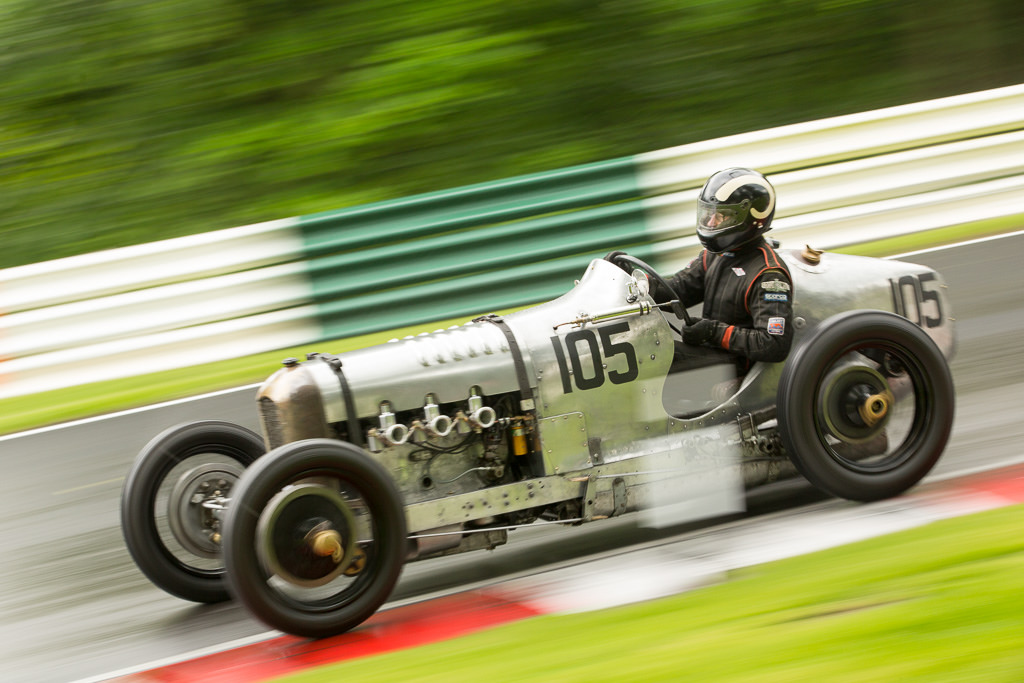 The ever present James Baxter races through the Hall Bends in the GN/AC Rabelro. A great sense of movement with a slow shutter speed through the rain at Cadwell.

I used a shutter speed of 1/50s as he charged through the esses in practice. It gave a great sense of movement as he piloted the car through the conditions at the Lincolnshire track.

Morgans in the rain at Cadwell

After practice had finished, the lunch break came – as did even more rain. The first race after the break was the Morgans – possibly the type of car you would least want to drive in such conditions around such a daunting track! I was on the inside of the Hall Bends when this race got underway, and is was simply amazing to see the three-wheelers race through this section of track. 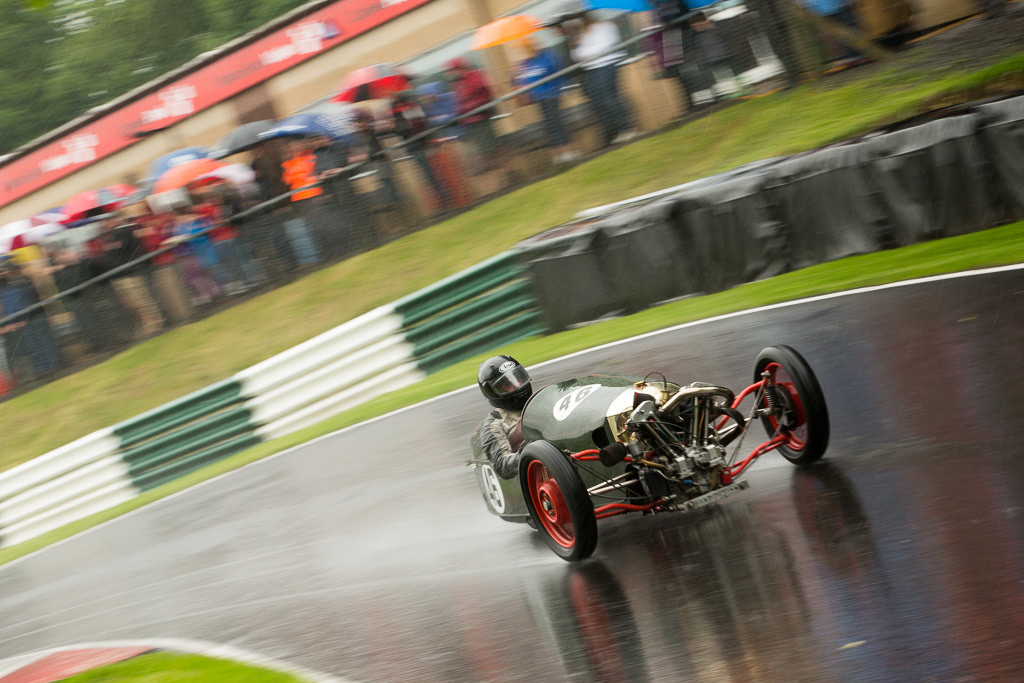 The Morgan of Greg Bibby and Maggie Tuer races into the hall bends. The reflections of the car and the fans with umbrellas summed up a very wet day at Cadwell.

I really like the way the reflections in the track picked up the reflections of the Morgan and the flurry of umbrellas in the background as people watched from the side of the circuit. The sense of speed and the soaking wet conditions created an image that summed up the event perfectly.

One of the most exciting cars to watch is Mark Walker in the GN Thunderbug. The combination of this unusual car, the energetic driving style needed to drive it, and it’s unusual sound make it a true spectacle to watch, especially at Cadwell Park. 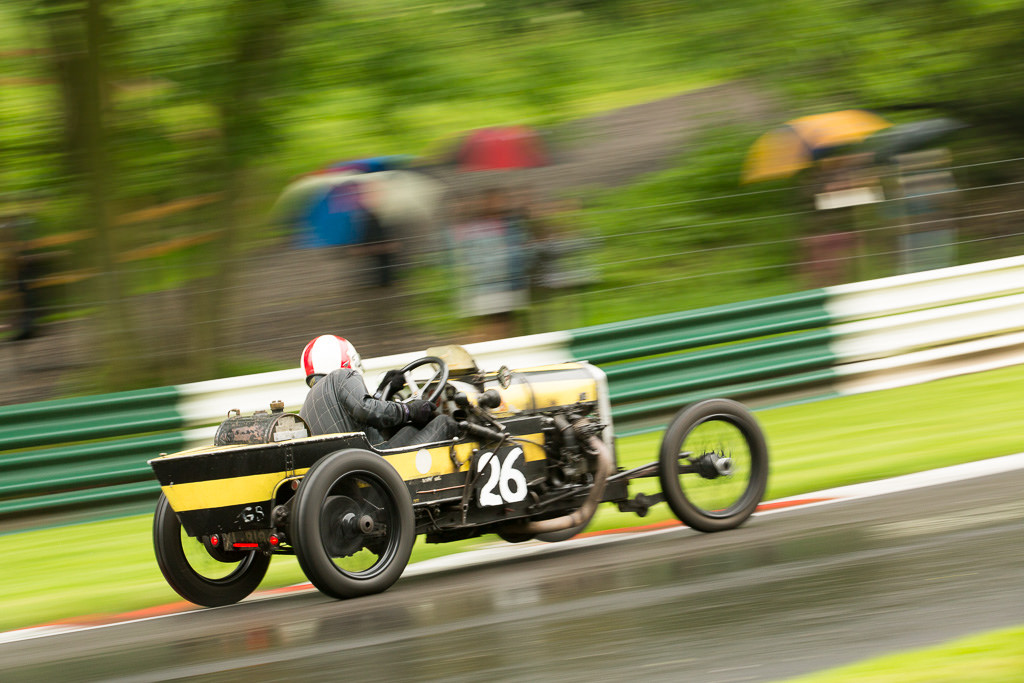 Mark Walker fights the GN Thunderbug through the Hall Bends in very wet conditions at Cadwell.

I really like the sense of drama and excitement, combined with the blurred umbrellas in the background. The focus on the driver as he fights the huge steering wheel shows how hard these cars are to drive in the soaking conditions at Cadwell that day.

A drying track in the afternoon

The sun did eventually appear in the afternoon, and the blistering heat soon dried the track up – to the extent where you could literally see the water evaporating off the surface. 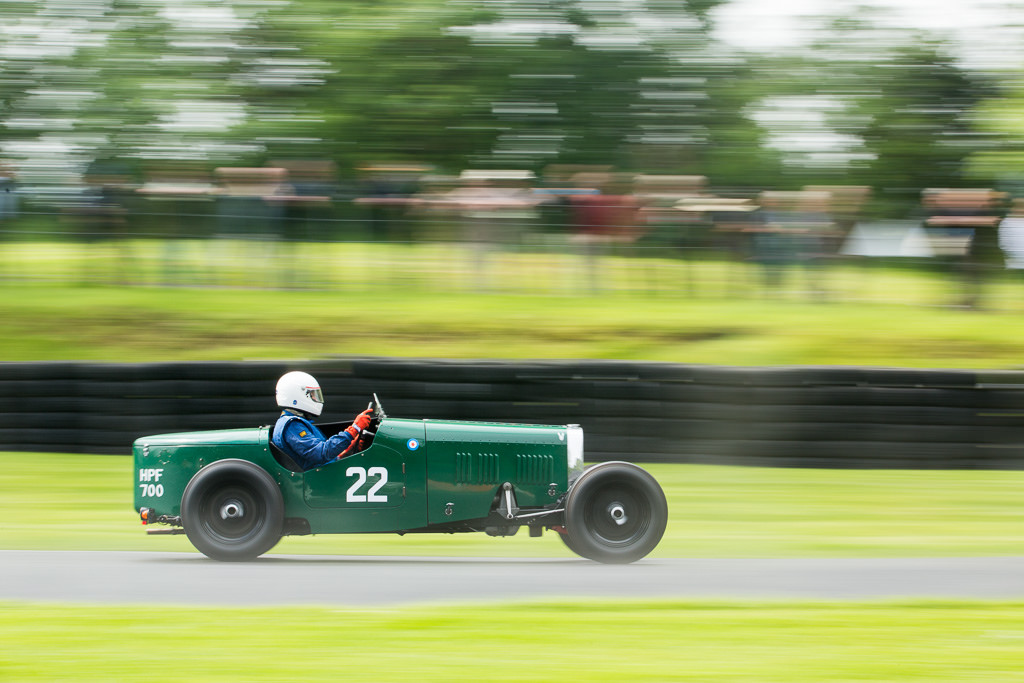 William Mahany’s HRG Le Mans Model races through the evaporating water as the sun came out at Cadwell Park.

William Mahany in the beautifully prepared HRG Le Mans Model raced through the evaporating water during the afternoon at Cadwell Park. I liked the very square, side on composition, with people spectating blurred in the background to add some extra depth to the image. A shutter speed of 1/40s was tough to work with, but did give the great sense of speed and blurred textures as the HRG raced by.

The Mountain is one of Cadwell Park’s key features; a slight chicane, followed by a very steep hill with a sharp crest is one of the most famous pieces of circuit in British motorsport. The dark green Frazer Nash SS of Eddie Gibbs charging over the top of the mountain provided a great photograph, as competitors could be seen entering the chicane in the background. 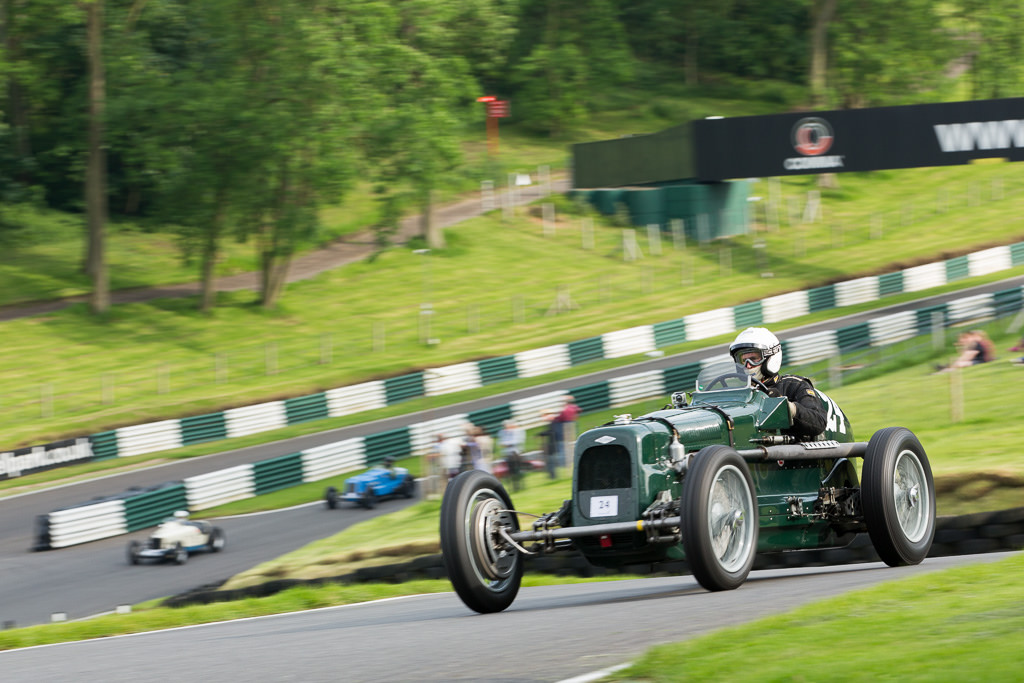 Eddie Gibbs in the Frazer Nash SS races over the Mountain. The cars in the background entering the chicane help to lead the eye through the photograph.

Bringing the Mamiya out to play

Once the rain had subsided, I was able to take the Mamiya out to put some photographs onto a roll of Delta 400. I had taken a few shots early on in the morning, but the heavy rain and a lack of suitable covering meant that it went back into the boot of my car until the afternoon. 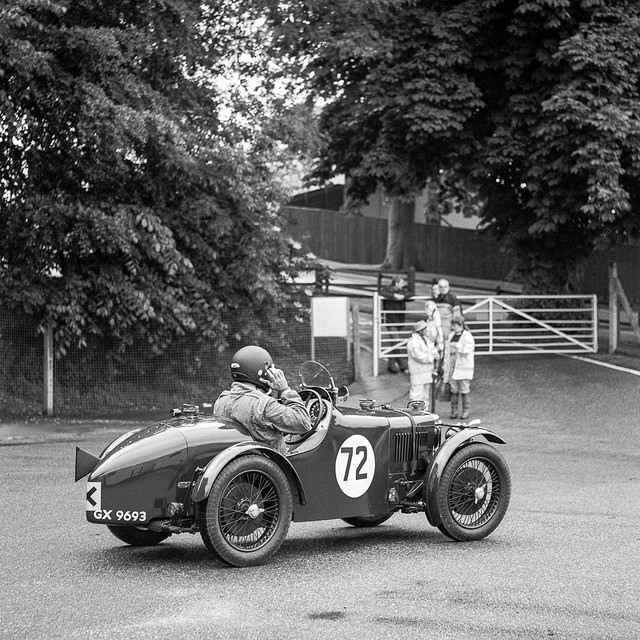 Duncan Potter puts on his helmet before heading out onto track in the MG.

Duncan Potter waited in the assembly area before going out on track to join practice in the morning. I liked the sharpness and tones of the trees, as well as the little group of marshals by the gate in the background. A shallow depth of field separated the car from the dense foliage overlooking the assembly area.

The tiny Morgan Special is an unusual site, due to it’s four wheels as opposed to the typical three of a Morgan from the 30s. I used the 135mm f/4.5 lens to photograph the car as it raced over the mountain in the afternoon. 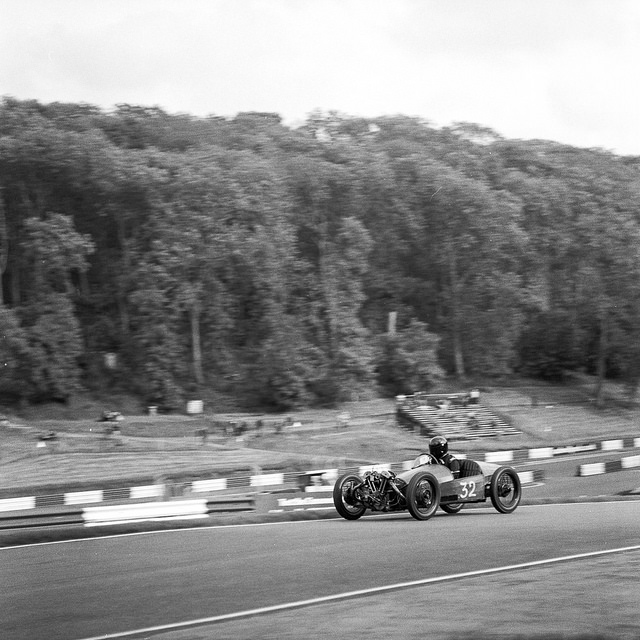 The tiny Morgan Special driven by Charlie Martin races out of the mountain section at Cadwell Park.

Using the Mamiya left hand grip certainly has made panning easier, as I discovered at the Donington Historic festival event earlier in the year. There is just enough blur to isolate the car from the rest of the background, while remaining sharp in the frame.

Another year, another great event

Despite the heavy rain, the excellent racing more than made up for the soggy conditions at this year’s VSCC event at Cadwell Park. My rain preparations worked well, but hopefully I won’t have to use them too often for the rest of the year! I could do with getting some kind of cover for the C330F, to help with protecting it from the rain. I’m sure there were some great shots I wan’t able to get due to the weather, but hopefully I can fix this in the future.

More photographs from the event can be seen in the VSCC Cadwell Park: Shuttleworth & Nuffield Trophies 2014 album on Flickr.