On the 5th of May I ventured down to Donington Park for the Donington Historic Festival, which took place on the National layout of the Derbyshire track.

A new and helpful tool…

After my disappointment at Silverstone using the 180mm Mamiya lens to photograph cars racing, I brought with me the Mamiya left hand grip to try and improve panning shots on the C330F. I was hopeful that this would improve my ability to hold the camera steady while photographing passing cars with this rather heavy camera and lens combination.

Out on track I switched between the 5D and C330F depending on the cars racing. I found that the chicane at the end of the Nation circuit was a brilliant place to photograph, with cars pushing hard through the fast curves before racing down the grid. 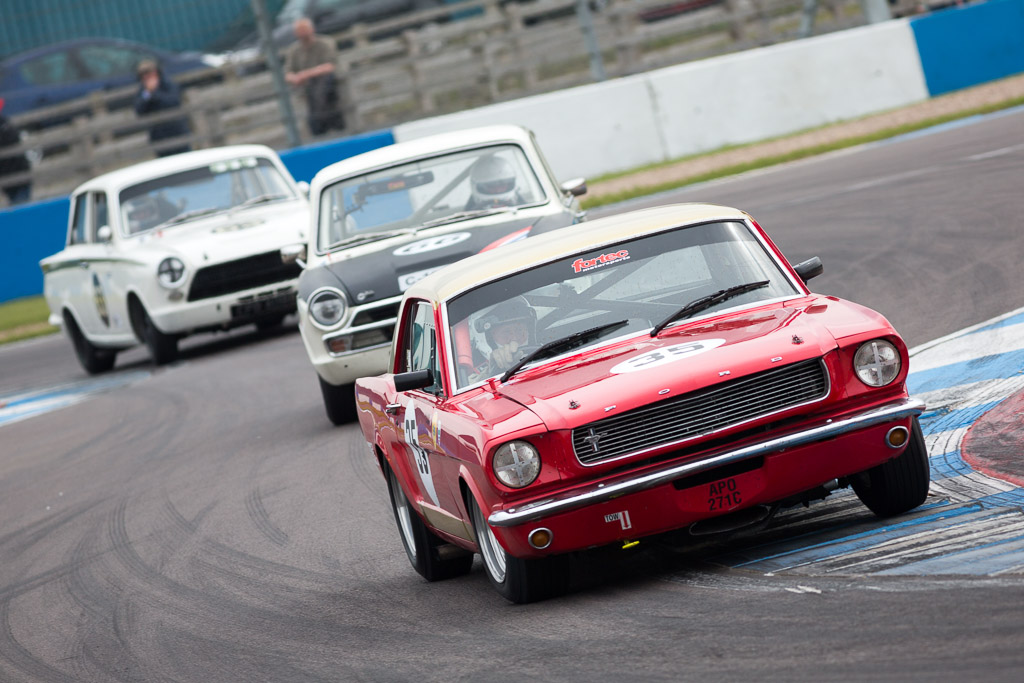 A trio of classic touring cars racing through the chicane at Donington Park. I liked the composition of three and the way the curve leads the eye through the photograph.

Waiting for cars to enter the frame and remain whole was tough as the cars fought for position. There was a rather scary moment when one car went wide and into the foam barriers, but luckily the driver was able to reverse out and continue despite the dramatic contact with the wall.

I often find it all too easy to fall into the ‘zoom in close and shoot’ mentality, and I have tried to get out of doing this by changing to wider lenses or even primes to force me to think in a different way. Using the 70-200mm at its lowest zoom level allowed me to get a great sense of scale as Lister Knobbly raced out of Redgate and down the Craner Curves. 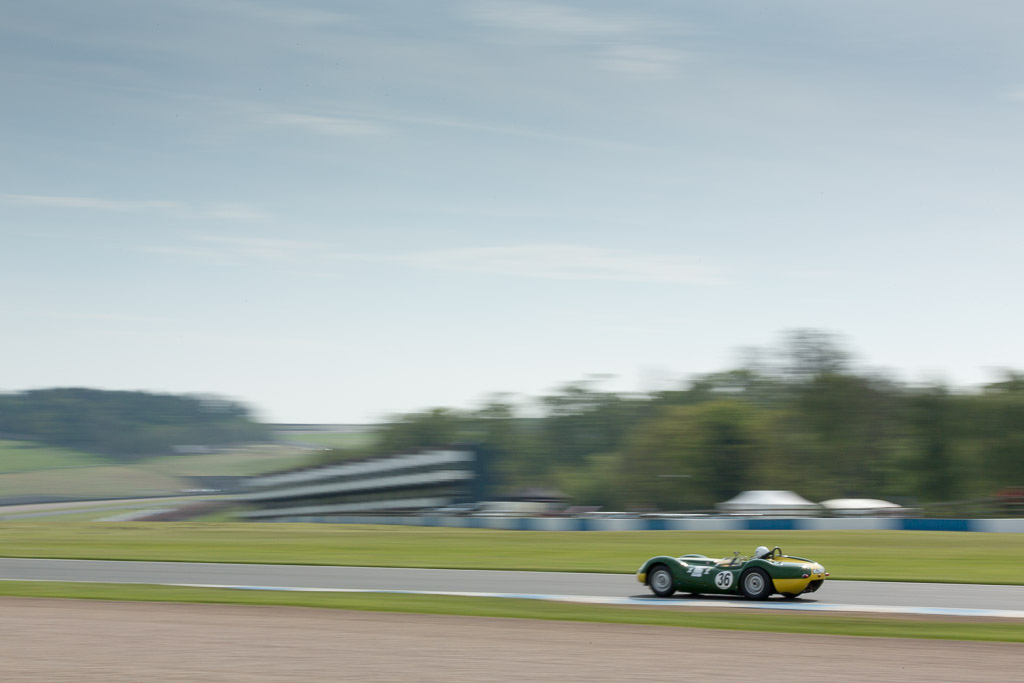 The Lister Knobbly races toward the craner curves at Donington. I loved the sence of scale in this shot, as it was instantly recognisable as the distinctive Donington circuit.

I got the opportunity to use the 180mm Mamiya lens on the C330F to photograph the vintage race cars as they went through the Craner Curves. The ever-present Frederick Wakeman took part in this race, in his distinctive Frazer Nash Super Sports machine which went on to win it’s second race of the weekend. 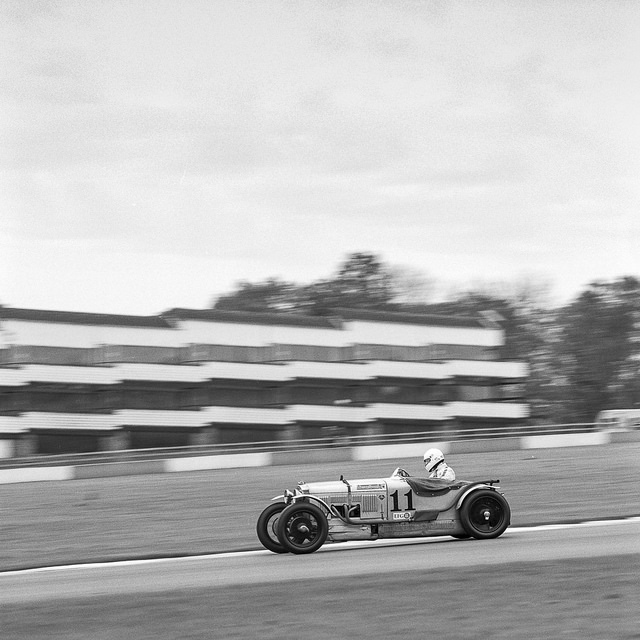 Frederick Wakeman races through the Craner Curves in his Frazer Nash Super Sports. The C330F left hand grip worked a treat to photograph this panning shot at 1/250 on FP4.

The left hand grip was very effective at allowing me to hold the large weight of the C330F with prism finder and 180mm lens steady as cars raced past. The FP4 film also produced great tones in the machinery as it raced past. This was certainly a worthwhile investment.

In the pits and Paddock at the Donington Historic Festival

There is always a great selection of cars in the pits and paddock at the Donington Historic Festival, and this year was no exception. The Blakeney Motorsport trailer had a Austin Healey up on stand being worked on, and this mix of classic British sportscar and modern trailer proved to be an excellent photo opportunity. 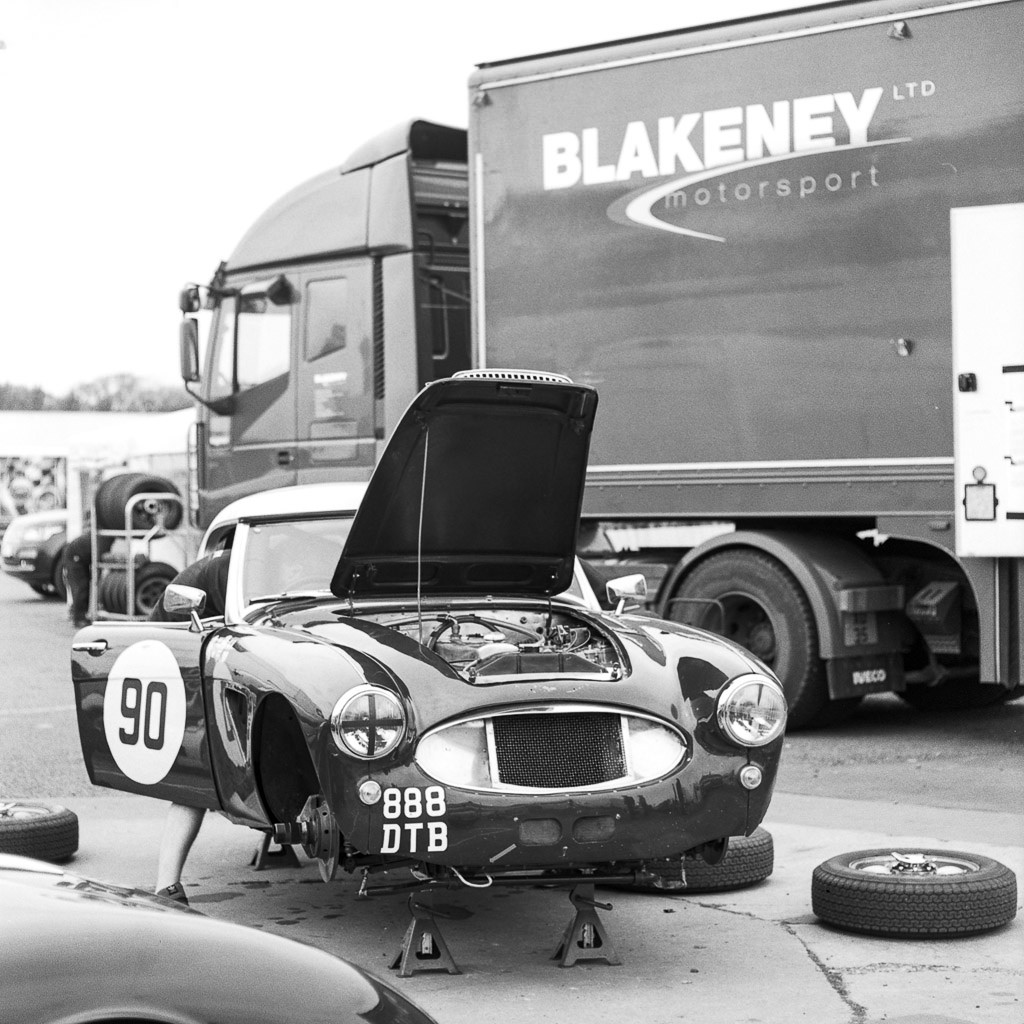 The Austin Healey of Steve Boultbee Brooks and Robert Beebee on stands in the paddock. I really liked the tones and sharpness of this, from the slightly longer 135mm Mamiya Lens.

The 135mm Lens changed how this photograph looked compared to the standard 80mm lens that I usually use. The extra length provided much more depth to the image, putting the car larger in the frame while bringing the background in to complete the right side of the image. I think this use of the longer lens could be useful to use to photograph other cars in the paddock in the future.

The distinctive lights and badge of a Lotus sitting in a garage produced an interesting depth of field based composition, with wire wheels propped up in the background of the shot. 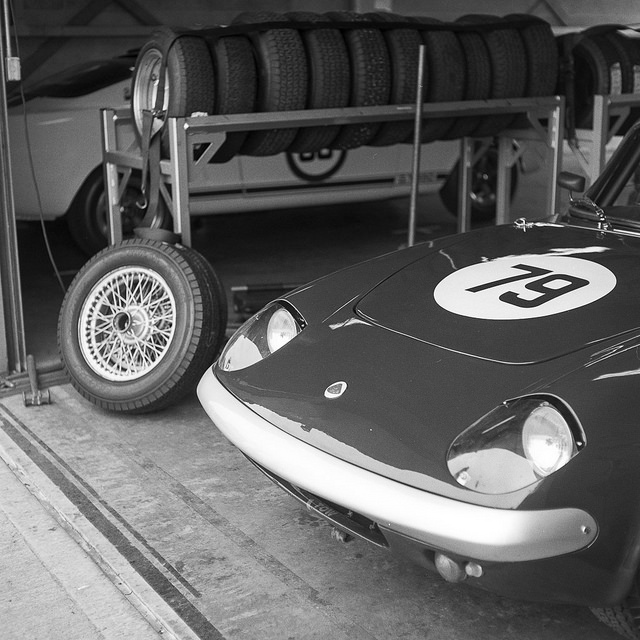 The nose of the number 79 Mark Martin Lotus Elan in the pits.

I was surprised how many shots there were to find in the pit area. This is something I should keep in mind for when the VSCC goes to Donington later in the year.

After a great day at Donington I processed all of the film photographs in DD-X, and all of the digital photos in Lightroom. Yiou can see a set of images from the event over on my Flicker in the Donington Historic Festival 2014 album.