On the 17th of May I went over to the Haworth 1940s event in this most historic West Yorkshire town. The beautiful weather provided great light to photograph with the Mamiya C330F at one of the best vintage events of the year.

Only one way to go at the Haworth 1940s Weekend

After taking some amazing photographs last year at the event, I chose to return and photograph on a single format, as opposed to last year where I used the Mamiya, a Brownie and a Fujica SLR. I felt that by far the best images came from the Mamiya, so put all my efforts into using this brilliant TLR to photograph people participating at this event.

One of the big attractions on the Keighley and Worth Valley Railway was the newly renovated US Transportation Corps train, which had been returned to it’s full glory by the hard working volunteers on the railway. The train was on display, fully steamed up and raring to go at the deport next to the Haworth station. 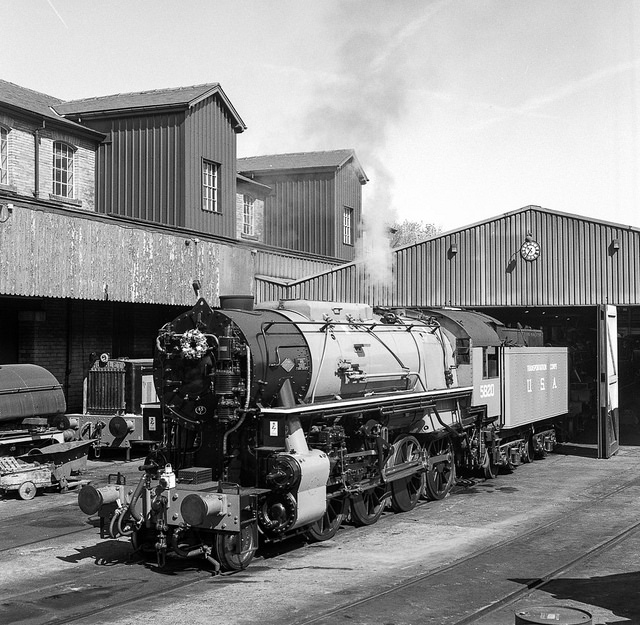 The newly renovated US Transportation Corps train at Keighley Station. The perfect conditions, combined with FP4 provided a sharp, tonal and detailed photograph of this stunning steam train.

The FP4 provided a really sharp, contrasty photograph, showing the engine off at it’s best. At around F/11 the 80mm lens captured loads of detail, all in a crisp, sharp image.

There were plenty of people in authentic military outfits, despite the baking heat during the day. The dedication of these volunteers was great to see, and even better to photograph. 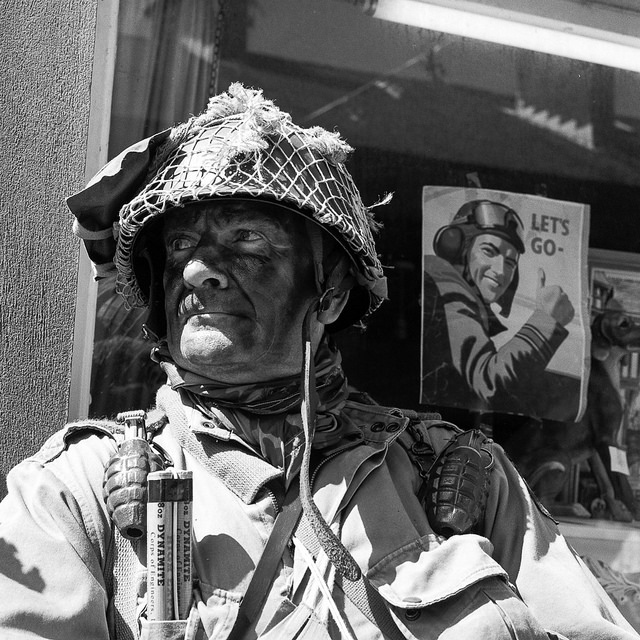 A soldier in full army clothing in front of a ‘Let’s Go’ poster in one of the many shops. I really liked the shading over the eyes, as it provided a deep, thoughtful expression on the gentleman’s face as he looked away from the camera.

I often like photographing re-enactors wearing aviator style sunglasses as these often reflect me taking the photograph on my TLR. I think this actually adds to the image, rather than the traditional thinking of it being a problem. 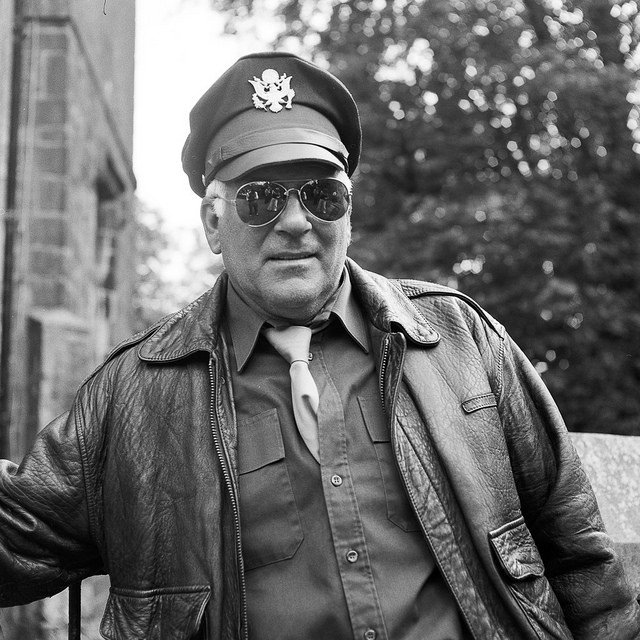 A gentleman dressed as a US Airforce officer wearing aviator shades. I can be seen in the reflection taking the photograph, providing an extra piece of detail to the image for keen observers.

The textures and tones of the leather worked really well here, as did the casual pose of the gentleman being photographed. This casual stance suggested the typical reputation of Americans during the war, adding to the period feel.

I’ve noticed that I’ve not photographed many ladies during the time that I’ve been going to vintage event (with the exception of The Honeybird ladies). It’s often difficult to find just the right look that will work on the film camera, but I’ve started to try and improve this during recent events. 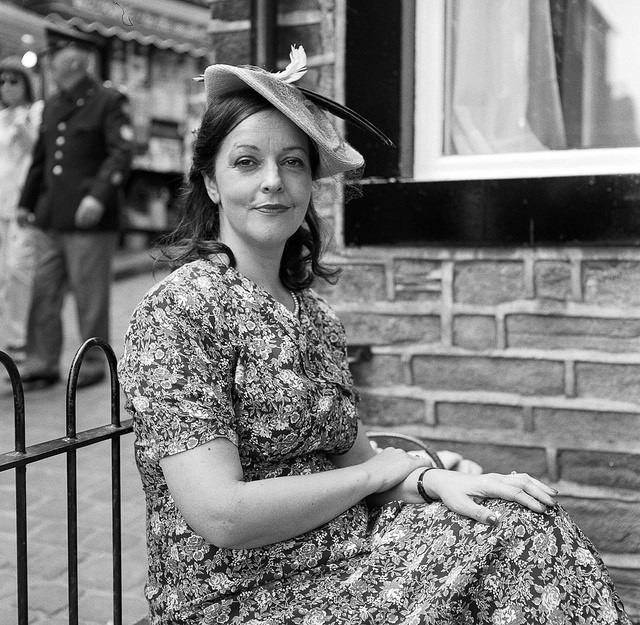 I’ve photographed this lady at other events in the past, as she has just the right look for these efents. Here, the flowery pattered dress and hat work really well in creating a detailed photograph.

I want to try and photograph more women at events in the future to stop my images simply becoming dominated by soldiers and spivs. This could hopefully bring a new dimension to this ongoing project.

I felt that one image in particular summed up the weekend perfectly. I saw one of the many people dressed in air force uniforms with a cigarette half way up Haworth’s famous hill, and took the opportunity to photograph him in front of the bunting covered railings of the pub. 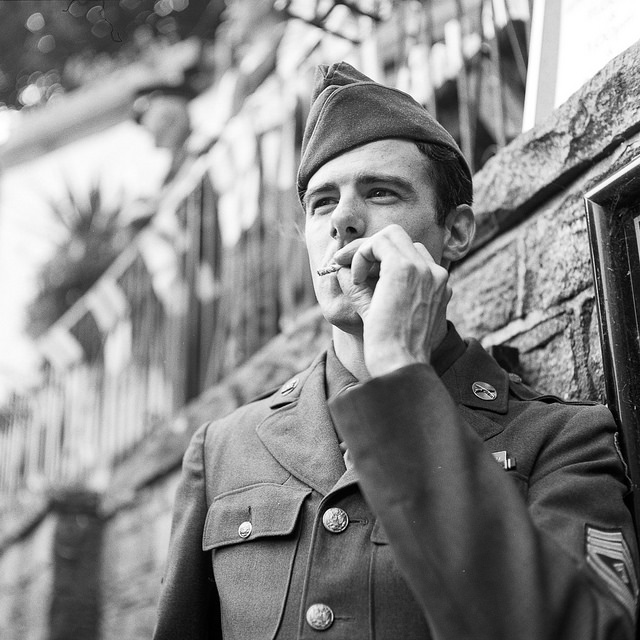 This image had a fantastic vintage look, with the clothing, cigarette and background all supporting the main man in the photograph. The distant look in the eyes and sharp detail creating a stunning photograph.

I was really pleased with the image quality and composition of this photograph, and I am hoping to print this at some point in the future. It had a really genuine feel that fits in exactly with this series of images, and has proven to be popular on Flickr.

Just like last year, the 2014 event in Haworth was fantastic – possibly even better than last year. The mix of friendly re-enactors, music and stalls provided a great day out in the lovely May weather.

I have created an album of Haworth 1940s Weekend photographs on Flickr with more photographs. If anyone featured in these photographs would like a print of there image, please get in touch.