On the home front at Easter: Crich Tramway 1940s Event

Over Easter I visited the Crich Tramway 1940s event at the national tram museum in Derbyshire. I have been to previous events which have proven to be excellent for taking photographs on the Mamiya C330F. I have also taken images on the Graflex here before but I decided to focus soely on some 6×6 portrait and reportage style shots.

What stock of film? An obvious choice

As clouds loomed over the museum, I did think of using Delta 400, but fortunately I ended up loading FP4+ at 125 ISO which proved to be ideal for all conditions. If I had loaded Delta 400, I fear I would have been crashing into the f16 at 1/500 mark, which would most certainly not have been ideal.

After using the longer 180mm lens at Silverstone, I felt the need to get a longer 135mm lens for portraits. Having found one for a reasonable price on Ebay, I had the f/4.5 lens ready to use at Crich. On this lens the aperture ring doesn’t click like on most of the other lenses, instead just sliding freely between them, so checking before shooting is a must. 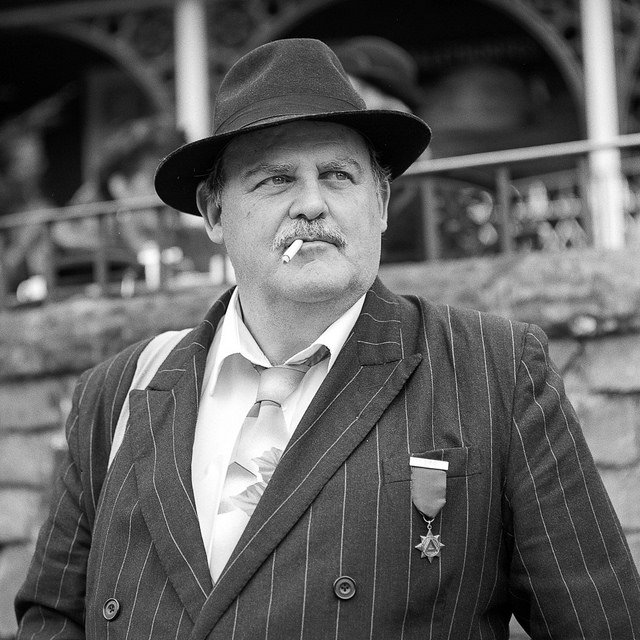 The 135mm lens produced beautiful background blur, and appeared to be just as sharp as the other excellent Mamiya TLR lenses. FP4 once again proved to be a great low speed film for bright conditions.

I was impressed with the lens which proved to have every bit as much quality as the other Mamiya lenses in the range. There is still the 105mm TLR lens which has an aperture of f/3.5, but this does appear to be rather rare. I think the 135mm is long enough for good portraits while still being a manageable length out on the street. I’m looking forward to using it at circuits to photograph drivers at the wheel, as it will allow me to stay further back for the cars as competitors prepare to go out on track.

Back to the waist level finder

I usually use the prism finder for photographing at motorsport events, as this correctly inverts the image, much like an SLR viewfinder. It is also designed for use at eye level, making it much easier to pan with cars. The drawback is that this does appear dimmer, meaning that focusing can be much harder. At Crich, I switched to the waist level finder with the fold out magnifier, providing a much more traditional TLR shooting experience. 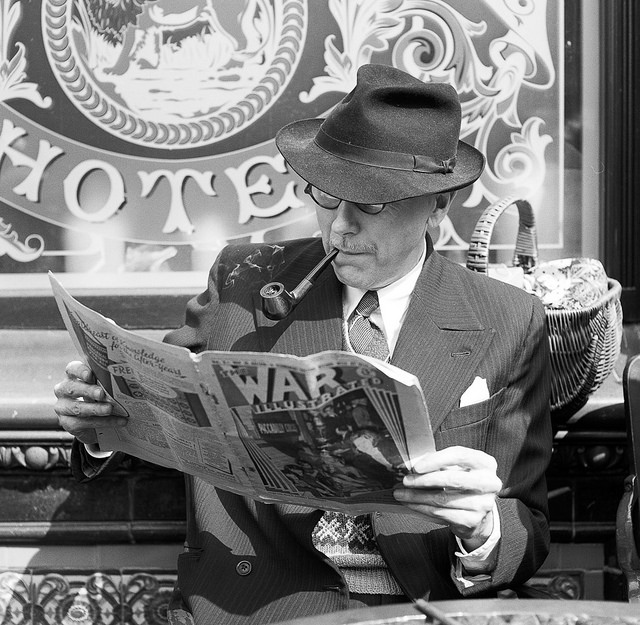 A smartly dressed man reading a newspaper outside the Red Lion pub at Crich. The waist level finder allowing for a lower perspective, and pin sharp focusing.

On the Monday of the event I met up with fellow TLR enthusiast David and Graflex fanatic Anthony (1940s Pressman), both of whom were carrying lovely Rolleiflex cameras. Their equipment was certainly more of the period than my mid 1970s Mamiya, and no doubt substantially lighter too! Both of these gentlemen had plenty of useful knowledge to discuss, from film stocks to fascinating film camera trivia. I took a sneaky photo of these gents discussing their film photography over a Graflex ground glass at the museum. 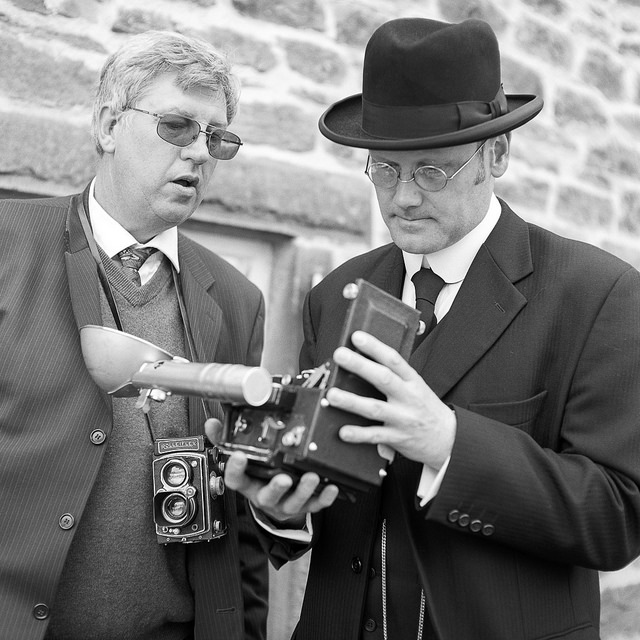 1940s Pressman Anthony shows David the wonders of the Graflex ground glass, with both gents in the appropriate 1940s attire.

It was a great pleasure to meet other people so enthusiastic about ‘proper’ photography, and see the beautiful period cameras they took to photograph the event.

There are always re-enactors at these events that really look the part, none more so than the people dressed in military uniforms. I photographed one such person in American army clothing, including netted helmet, smoking a cigarette. 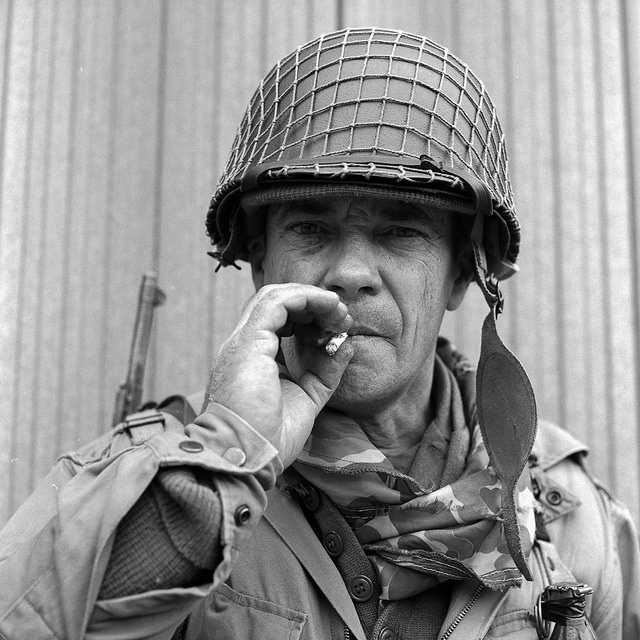 A US troop smokes a cigarette, the shading of the helmet of the eyes providing a strong emotional attachment to the photograph. Even the textures on the helmet were picked up by the 80mm f/2.8 blue dot TLR lens.

I found that this image felt very powerful, and had the press style attitude of war photography. The detail in the textures gives a very ‘real’ feeling to the photograph.

Can you smell bacon?

One of the most authentic feeling images of the day came from what was in fact a quick snap shot of a police man on a bicycle at the far end of the village. For some reason, the whole pose of the Copper, combined with the tram and cobbled street in the background, produced a very endearing photograph. 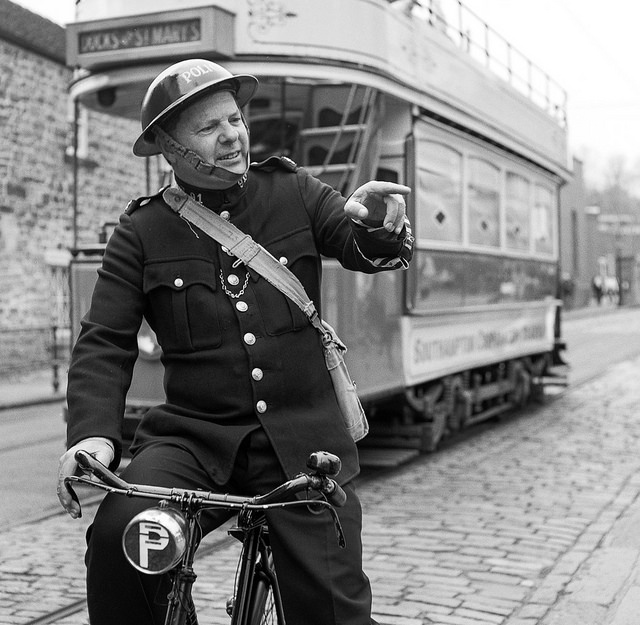 A policeman on a bike as a tram passes in the background proved too good an opportunity to miss, and produced a great, authentic image.

A fantastic event, a great camera

As always, the Crich Tramway 1940s events proved to be a great day out, filled with enthusiastic and approachable re-enactors, friendly staff and plenty of great photo opportunities.

The ‘new’ 135mm lens proved to be a great image maker, and it was refreshing to go back to the waist level finder which provided a clear view as I composed portraits throughout the day.

I have put together an album on Flickr of photographs from the Crich Tramway 1940s Event for you to view at your own leisure.