The 2014 VSCC Silverstone Spring Start marked 80 years since the English Racing Automobiles company was formed, as well as the Vintage Sports Car Club. This year’s Spring Start event was another two day affair, featuring a plethora of racing exotica.

A ‘new’ 180mm lens for the Mamiya C330F for Motorsport Photography

To photograph the racing trackside with my ever present Mamiya C330F, I invested in a 180mm lens from Janet Green Photographic in Halifax, for the low low price of £59! This f/4.5 lens certainly adds a fair amount of weight to an already heavy camera. I found that the panning shots from this camera were very hit and miss, even at 1/250, but surprisingly I managed a great portrait of John Romarno his Brabham BT11. 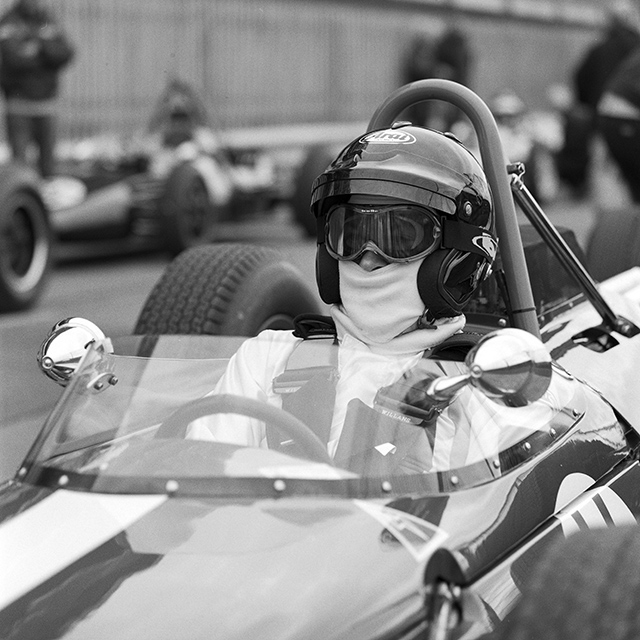 Racer John Romano at the wheel of his Brabham BT11 in the assembly area, taken on the 180mm f/4.5 Mamiya lens with Delta 400.

From the panning shots I managed to photograph two sportscars including the Alta Jaguar racing over the grid hatchings. I think that the left handed pistol grip will be needed to make panning shots with this lens a little easier but the image quality is certainly there, as you’d expect from a Mamiya lens. 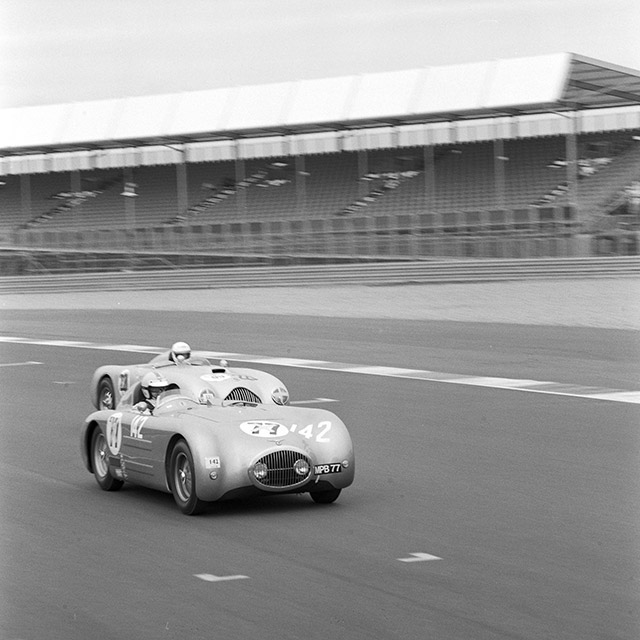 Two sportscars race over the grid hatchings at Silverstone, including the Alta Jaguar of Charly Willems. Taken with the 180mm f/4.5 telephoto Mamiya lens on Delta 400.

Both images certainly had a historic and genuine feel to them, although the Delta 400 doesn’t have quite so much contrast as the FP4+. Hopefully with some more practice, and maybe the left handed grip, photographing panning shots with this lens will become easier.

ERA: the stars of the show

With the ERAs getting top billing at Silverstone for this event, it was only fitting to capture the wheel to wheel action as the cars pounded around that National circuit. Paddins Dowling and Nicholas Topliss were fighting hard for honours around Luffield, providing the perfect opportunity to photograph these wonderful historic cars at their best. 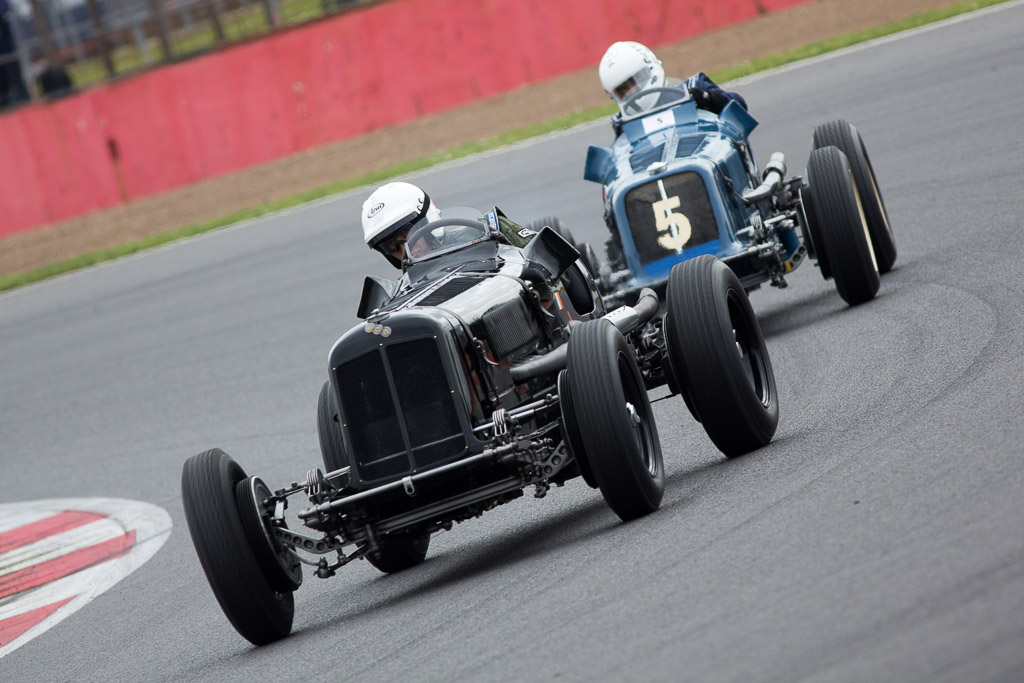 Two ERAs fighting for position around Luffield, captured with the 400mm f/5.6 lens.

The ERA of J M Hulbert had a scary moment, as heading through Copse the car swapped ends, flying backwards towards the barriers on the inside of the turn. I managed to get a few shots as the car flew backwards towards possible disaster, the tyre smoking heavily as the driver tried to regain control. 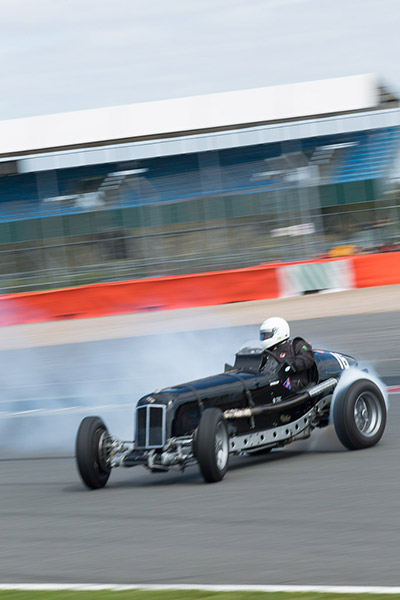 Thankfully, the driver somehow kept the car out of the wall and managed to continue. The inside of Brooklands and Luffield has proven to be a great place to photograph from, as cars brake and hold a tight line through the complex. This photograph of the Calum Lockie’s Maserati arguably became the shot of the weekend, with a shutter speed of 1/25 capturing great movement in the background as the car passed the distinctive BRDC building into Brooklands. 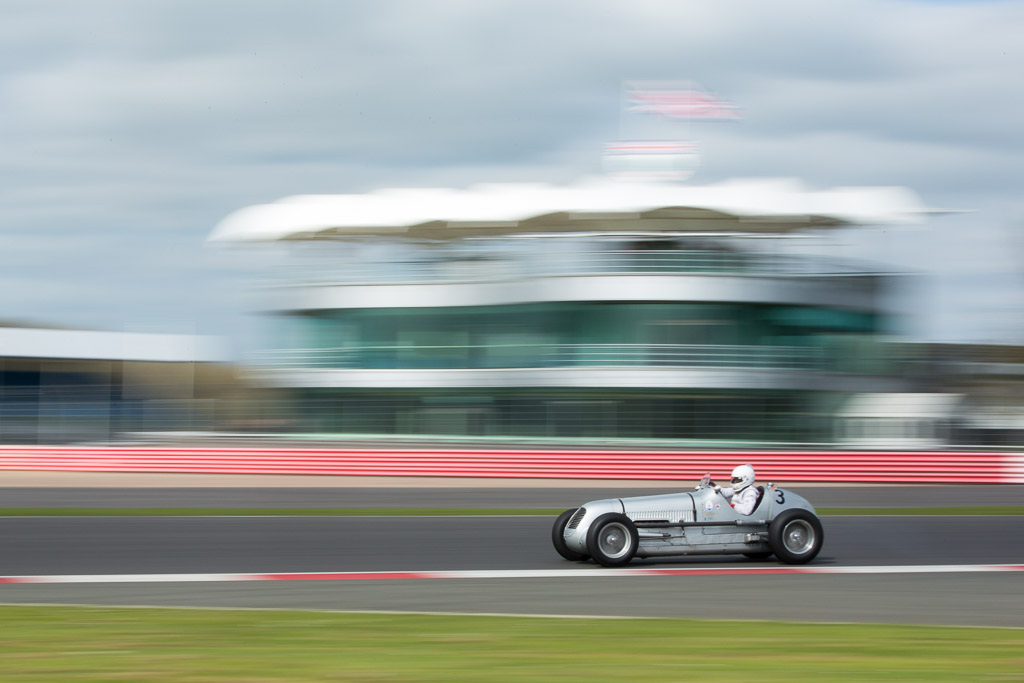 Calum Lockie’s Maserati looks beautiful as it passes the BRDC building. this is definitely the place to photograph from on the National circuit at Silverstone.

The allure of Ilford FP4+ in the Mamiya, which is probably my favourite black and white combination, proved to be ideal for photographing cars in the assembly are before they headed out on track. Combined with the wide 45mm lens, I photographed the front engined cars as they waited to join the track. 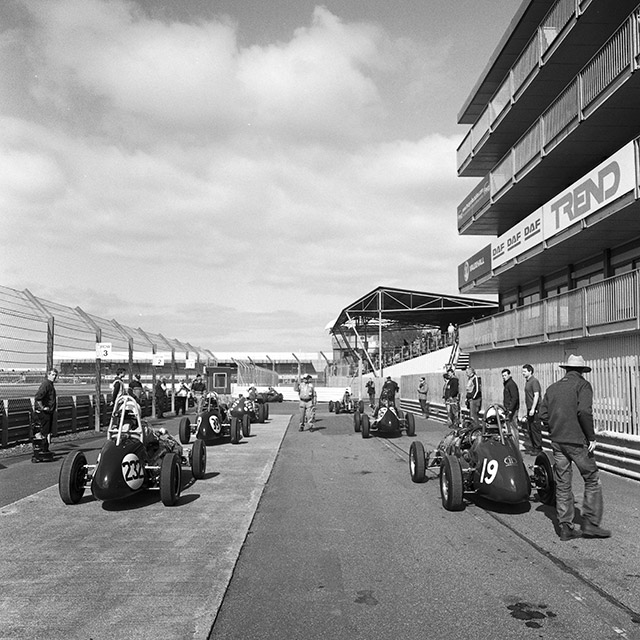 The front engined single seaters prepared to go out on track in the assembly area. The FP4+ proved to be very forgiving, capturing both the tones in the sky and of the cars as they lined up.

A great weekend of racing, but some lessons learned.

I think to improve panning shots from the C330F will require a left hand grip – its simply too hard to get a good grip of the camera with the focusing dials. Even a conservative shutter speed produced some blurry results. I also think using a higher speed film for panning will allow for sharp shots without too much contrast loss.

I do think however that the longer lenses produce great results for portraits of drivers, as seen with the John Romano photograph. Optically, this lens is again superb.

I decided to record some video at this event, mainly for the sound, to produce a slideshow of my shots from this event. I put together a video in Adobe Premier Pro, and uploaded it to Vimeo. You can see my VSCC Silverstone Spring Start video here or embedded below. I may record more video at future events, as the 5D MkIII is supposedly a very capable camera in this department.

There is also a set on Flickr of my Silverstone Spring Start photographs too.